The material that became the source of "super! Gaba" is the one that HobieFix has interviewed in the United States of M1911A1 military model manufactured during the Second World War. Drawings drawn using analog measurements and optical measurements are very precise. In addition, the model used for coverage has been completely divided and the internal geometry has been measured accurately, and even on the 1/3 scale, it can be said that it was able to operate without any modification. In this "super !! Gabba", the dimensional tolerance reduced to 1/3 size is further reduced, and the value when considering it as a precision machine has been raised. As a special mention, there is "Reproduction of rocking as original". With the slide closed, the locking lug (convex) of the barrel meshes with the recess (concave) inside the slide. Actually, the recess and the bleach face (bottom surface of the cannon) are machined into an inclined shape following the forward inclination angle of the barrel. In Togun, it is common to manufacture molds such as injection and die casting, but this part seems to be changing to the straight shape with the escape taken because it becomes the under shape (the part where the mold can not come out) .

Regarding the reproduction of this part, there is nothing else to insert by inserting a long blade (rotary blade) from the tip of the slide, in particular on the 1/3 scale the cutler becomes thinner so that it will not break or the slide itself will not be damaged I worried, but I successfully achieved my purpose.

By this, when sliding closure is engaged, it is reasonably open by circle movement, but this delicate movement is transmitted to the fingertip slowly drawing the slide, and it is fun to watch at the same time and it is very interesting.

When putting the 1/3 scale · Government M1911A1 which all the parts which received baptism gathered in the palm, you can feel the energy from the sense of the hand and from the vision. This expression is never over, it will come to you as a real feeling. The naming of "super! Gaba" is the reason for this 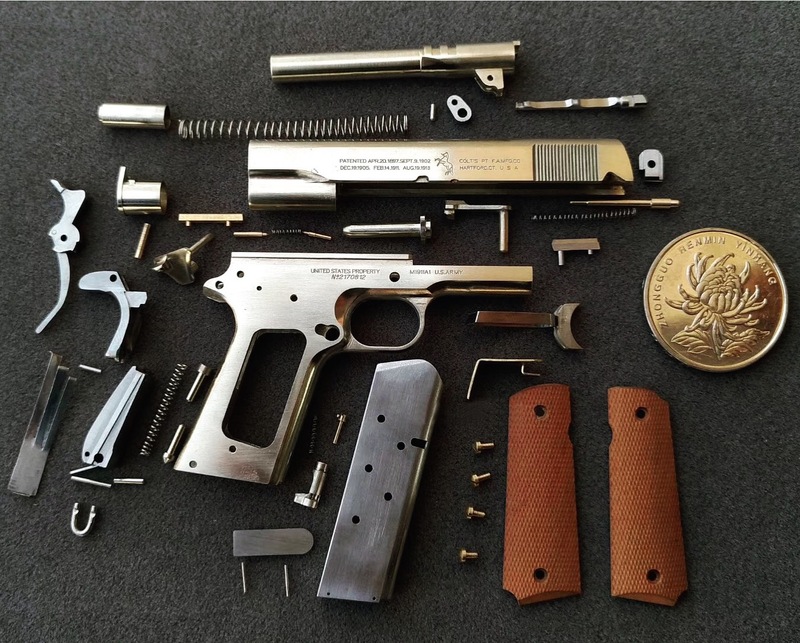